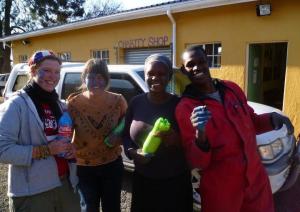 Lisa was a Volunteer at Isibani from August 2010 till August 2011. Now after three and a half years she came back for three weeks to visit us and our Community Centre. Sadly she left again, but today we received a letter from her to tell us about her time and impressions she had while being here with us:

Three and a half years. That’s about 1300 days. 30660 hours. Countless moments…
One thing I did learn during my time as a volunteer in South Africa is that life never stops, not even for a second. Even if we don’t want things to change, they do with every breath, every step we take. So when I planned my trip to visit South Africa after all this time, I tried very hard to keep that in mind. To remind myself, prepare myself that things and people are going to be different, changed. I am certainly not the same person who left SA in 2011 after one year of volunteering with Isibani. And all the people who left their mark in my character and my heart during this time are neither. Too many defining moments and changes have occurred since then in our lives that we missed out on or shared with other people in completely different worlds.

When it comes to Winterton and Isibani quite a lot of defining changes have happened. First and foremost the Place of Safety comes to my mind. It was a mere idea when Miriam and I left. Seeing that it is now up and running, giving shelter to endangered children who have nowhere else to go, is pretty amazing.
But also the everyday routine of Isibani has changed. The work has shifted towards being more community-based instead of center-based – sometimes leaving the Isibani site strangely quiet. Of course there has been a change of staff too. Even though it was awesome to see that some of the people I got to work with remained with Isibani throughout the years, it was a great pleasure to meet all the new staff members and to learn about the work they do within the community. I guess in a way the challenges are still the same and so is the way Isibani tries to face them – with immense love for the people, patience, hard work and trust in god.

For me coming back to SA was as much about catching up with everyone who made my year as beautiful as it was as to see if I could contribute something to this work by using the skills I had to offer.
Visiting the different crèches with Julia and Terry that are now operating in Khethani was just so very nice and fulfilling. It made me think of my days in the Baby Day Care – even though it was at different places filled with new care takers and children. I so enjoyed to support the care giving when some of the care takers were sick and delighted to watch the lessons and to see how quickly children pick up things.

The greatest Isibani-experience of my stay though was the basic first aid course that I conducted for community workers. When I first started planning I was not even sure if there was any interest or demand for it. Therefore I was quite overwhelmed finding out that 22 community workers were participating. In Germany I am part of a group that organizes first aid courses for med students. Doing it alone for „normal“ people was quite a challenge as I find that breaking things down to the basic and most important things is always hard. It was also difficult to adapt the course to South African circumstances. When an emergency occurs in Germany you call an ambulance and you can be sure that it will show within about 10 minutes – there is even a law that demands it. In SA on the contrary you might also have to consider organizing a lift to hospital yourself. This might interfere even with the best first aid. So what to tell people? That there is no point in starting CPR when you already know that the ambulance will only get there in 2 hours?
To me first aid is not only important for the person in need for aid but also for the first aider himself. The worst thing within a crisis is to feel like not being able to do anything. Enabling people to give sufficient help is important. Even if it turns out to be not successful. Besides there is always that percentage of people that can be saved by sufficient first aid. And this percentage (even though it might be lower in SA than it is in Germany) represents real people with a real life, real dreams and real loved ones – people who deserve that every first aider tries his or her best.
This theory was met by the participants by one hundred percent. They were more than keen on learning and practicing the different techniques, which focused on recovery position, cardiopulmonary reanimation, first aid in case of burns, heavy bleeding, choking and shock. In a course especially held for the Place of Safety mums we also dealt with special techniques for children.
It was such a pleasure to see all participants get more and more confident with their actions throughout the course. And to witness how they would correct and support each others during the practices. Teamwork – a very important part of first aid – came quite natural to everybody.
Of course you cannot learn first aid in one course. Even for me it is a challenge to remember everything correctly in case of emergency. It will not stick unless you practice. But what a course like this can do is to give people the confidence to approach a person in need and to at least try to help. To do something, even if it is just calling for help or comforting the person.
I just hope that the participants learned as much from me as I learned from them for all my future work in first aid courses. 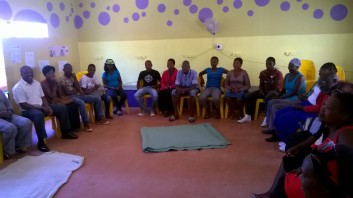 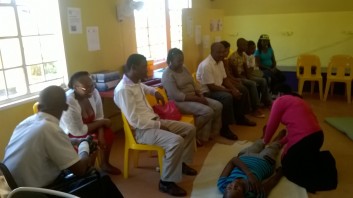 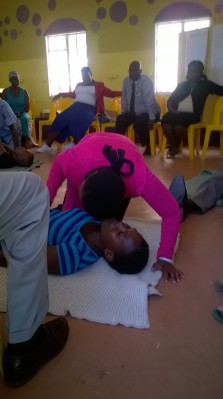 Not only this first aid course but every moment that I got to share with an Isibani-member or a member of the community they work for and with made me feel very thankful and blessed. For being able to experiencing it, being part of the Isibani team again, feeling welcomed and accepted and just right where I was. All the changes set aside the „Isibani-spirit“has remained pretty much the same throughout the last three and a half years.
***

The Dutch philosopher Soren Kierkegaard once said: Life can only be understood backwards, but must be lived forwards. And now that I’ve returned to Germany looking back at three and a half weeks in South Africa I understand one thing very well: Some bonds with people or even with certain places act like bridges stretching over all the steps of change that we take in between two encounters. And in these rare, lucky cases you do not have to fear the change, the differences between now and then. You can easily meet them with an open and interested mind, look at them curiously, and even appreciate them. And you can bring your own without feeling the need to conceal them or being afraid of not fitting in. Then you can just start again where you have left it. 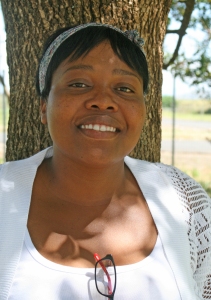 Since the beginning of March we have a new Team member, Thandy at Isibani. She is a qualified Social Auxilary worker and will help Xoli with her cases. Have a look -> here and check out Thandy’s profile. 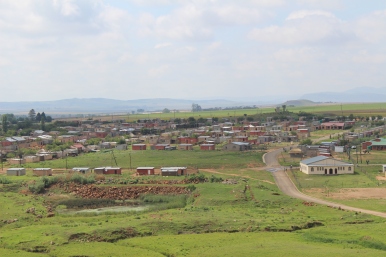 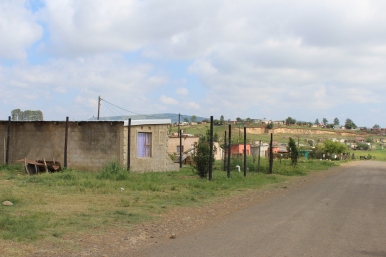 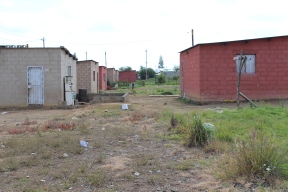 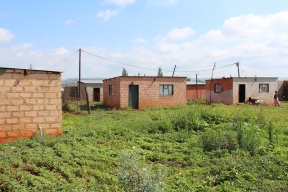 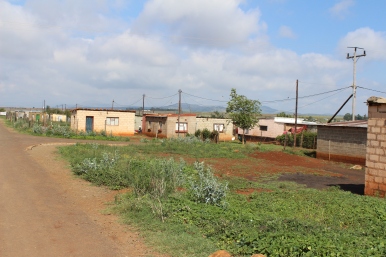 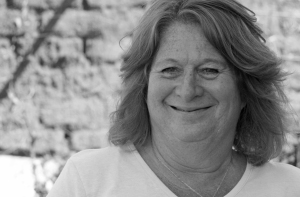 In February Terry moved to Winterton to work in our Community to work in our early childhood development department! Have a look what is happening around her since she started at Isibani -> Here

Terry is working very close with our Volunteer Julia together, and whenever we are looking for them we either find them in their office where they create new ideas what to craft and play with the children or even more often in the creche rolling around the grass, covered with lots of children and surrounded by laughter =)

note: Terry is very shy of a photo, but we promise to bring it soon! The same as Julia 😉

My family and I have been here in Winterton for three weeks and every day is an adventure that I look forward to with great anticipation.  I work in Khethani with the community and my goal is to identify their needs with regard to Early Childhood Development.  I assist, mentor, teach and uplift those with a calling to educate young children.  When I arrived the community had already started a creche from a building in Khethani and we had quite a few challenges to face.  After much appreciated assistance the grass was cut (it was up to my thighs when I arrived), the long drop made a tiny bit more sanitary; long drop!!!!!  Yes, there was a family living in the toilets!!!!!!  This little hurdle was crossed and the building was scrubbed clean.  Any day now the toilets themselves will be repaired and or replaced.  Water was another challenge.  The only tap was not working and the Jojo tank had long since met its fate.  Once again with much appreciated assistance the pipe was repaired, tap replaced and running water restored.
So where do we go from here?  Basins need to be put into the toilets so that proper hygiene can be taught.  There are repairs and maintenance to the building that urgently need to be done.  The children need a jungle gym. Currently we have the babies, toddlers and preschoolers in the same area, separated by a curtain.  Not ideal at all.  Another classroom for the babies would be wonderful.  A small kitchen is on the list.  The sand pit is ready and waiting for sand, kindly donated to us.  We need an awning to cover it as well as a cover for the sand pit itself.  The fence around the property needs to be repaired to keep the marauding goats out.  A vegetable garden has been made – once again my sincere gratitude to the people who made this possible.  Once the fence is repaired we, the teachers, volunteer, children and I will plant vegetables which the children will get to enjoy as part of their daily diet.
Over and above Khethani Creche I have identified other wonderful people taking care of young children in their homes.  Each one has children she looks after every day.  What are their needs:
So this is my story and I would love it if you would follow it regularly and travel the road with me.  Should you at any time feel you would like to be more involved there is plenty of room.  I promise it will be an adventure well worth your time!
Hamba kahle
Terry
Follow Isibani Community Centre on WordPress.com